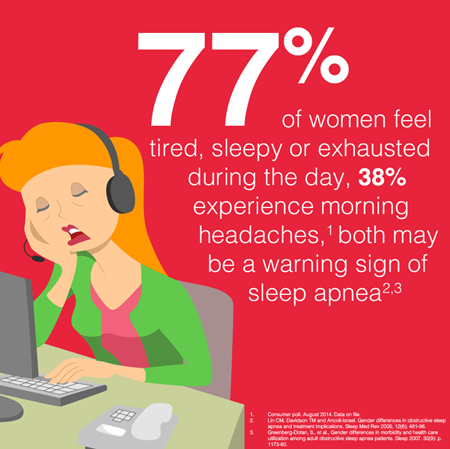 As women get older and their lives get busier, sleep often gets put on the back burner. Gone are the days where sleeping in until the afternoon on the weekend are the norm. Instead, valuable sleep time is replaced with things like running errands and early morning sport for children. And while the precious memories that are created watching your little ones run around on the field will last a lifetime, a stifled yawn at the game is not a rare occurrence

In a recent poll by ResMed it revealed that 77 per cent of Australian women feel tired, sleepy or exhausted each day.1 However, only 24% of women felt they needed to speak to their doctor about the problems with their sleep and the need to make improvements. The gap between women who wish they could get a good night’s sleep over those who feel they need to make improvements show that women may not be taking their sleep seriously.

What many women may not realise is that sleep is just as important to their health as a proper diet and regular exercise. Lack of sleep has far-reaching repercussions on a woman’s health and well-being, and on a daily basis, losing out on sleep can cut energy, reduce concentration and increase irritability. Prolonged periods of sleep deprivation have been tied to more serious factors such as weight gain and increased blood pressure.

There is a very real need for women to begin making sleep a priority. Nearly half of women should not be left wishing that they could have a better night’s sleep. So if this scenario sounds familiar to you, don’t hesitate to talk to your doctor about how to sleep better.

To view the latest discussions on women and sleep, visit our forum.

Find out more about unique therapy for women