What is sleep apnea?

If you’ve tried improving your sleep, but still snore or wake up feeling tired, you may be at risk of a common sleeping disorder called sleep apnea.

‘Apnea’ literally means ‘no breath’ or ‘stopping breathing’. When you have an apnea, air stops flowing to your lungs for ten seconds or longer.

This affects approximately one in five adults, so it’s more common than you might think.

What causes an apnea?

In most cases, air stops flowing to the lungs because of an obstruction (or blockage) in your airway. Your airway could become blocked due to:

There are three main types of sleep apnea: 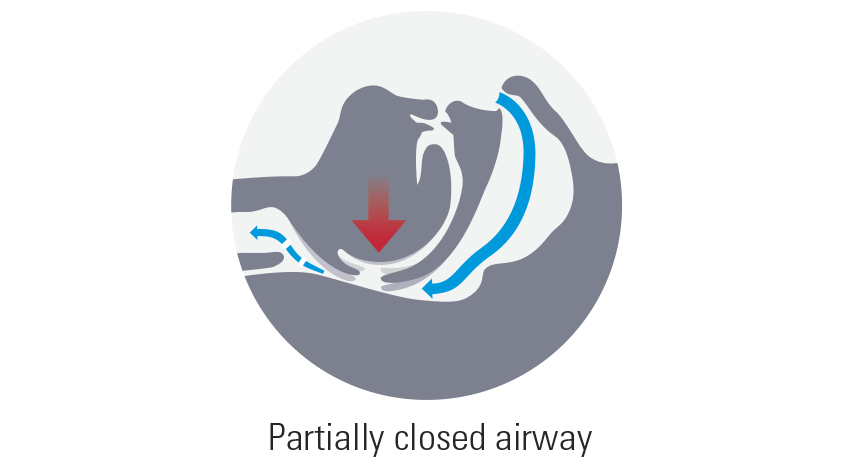 In most cases of obstructive sleep apnea, air stops flowing to the lungs because of a blockage (or obstruction) in the upper airway-that is, in the nose or throat.

The upper airway could become blocked due to:

* This narrow airway causes a vibration in your throat, which creates the sound of snoring.

Central sleep apnea (CSA) is the least prevalent type of sleep apnea.1 In some cases, the airway is actually open but air stops flowing to the lungs because no effort is made to breathe. This is because the communication between the brain and the body has been lost, so the automatic action of breathing stops.

Those with CSA don't often snore, so the condition sometimes goes unnoticed.

This is a mixture of both obstructive sleep apnea OSA (where there is a blockage or obstruction in the upper airway) and CSA (where no effort is made to breathe).Your doctor can help you understand more about this if you need to.

If you have any concerns that you may have any type of sleep apnea, please consult your doctor.

The first sign of sleep apnea is usually observed by your partner: snoring. They might also tell you that you make gasping or choking sounds while you are asleep.

It is estimated that about 34% of men and 17% of women aged between 30 and 70 suffer from sleep apnea. 2 Although this is similar to the number of people with asthma or diabetes, sleep apnea often goes undiagnosed. It was once believed that sleep apnea was mostly found in men over the age of 40, but evidence now shows that sleep apnea can now affect men and women of any age and even babies and children.

The effects of apnea on your body

When you have an apnea, air stops flowing to your lungs for 10 seconds or longer. A control centre in your brain triggers you to wake up just enough to take a breath. Then you fall back to sleep and the cycle begins again. In some people this can happen over 50 times every hour.

As you can imagine, constantly being triggered back into breathing-hour after hour, night after night, may put a strain on your body.

Because of all these associated health risks, it is important to take sleep apnea seriously. But the good news is that even if you do have it, there is something you can do about it.

“My wife used to complain about my snoring….”

“It was a pretty awful accident caused by me falling asleep at the wheel.…”

“For the last decade I have felt tired….”

The importance of sleep

Sleep and well-being go hand in hand, and getting a good night’s sleep is just as important to ...

ResMed is a recognised global leader in medical products for the treatment and management of ...

Do I need a sleep test?

If you’ve tried improving your sleep, but still snore or wake up feeling tired, you may be at ...